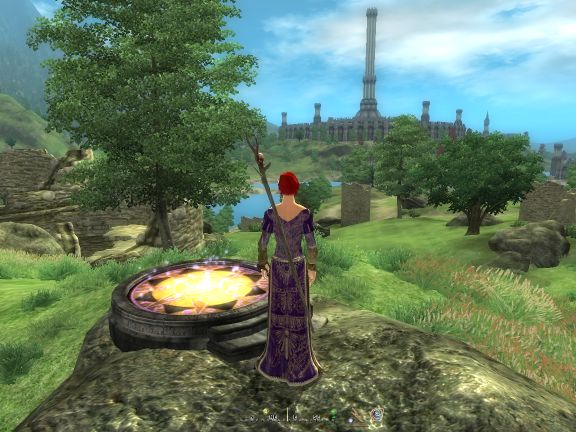 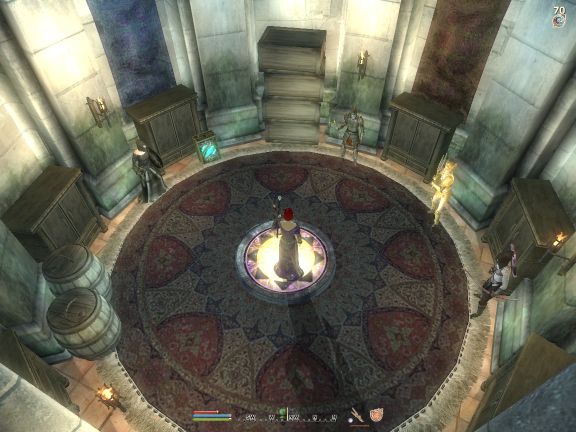 Yes, yet another pocket dimension. This one provides a moderate sized storage area in the Imperial City tower style. What's slightly notable about this is the mechanics of the entry, which tries to balance uberness a little bit, and the small quest associated with it. Because of the quest and the mechanics, your character will need to be somewhat sturdy, at least at Apprentice level in the Mage's Guild and have some fame.

Note: You won't be able to sleep in the cellar. (Bad etherial vibrations, apparently.) But there's plenty of storage room, it looks fairly nice, and there's room for some mannequins too. If you're in the wilds and would like to sleep in style, I suggest my Summon Bed mod.

Rigellius Salan, has acquired an exquisite new pocket dimension, and so is looking to pass his old (very nice, but not exquisite) pocket dimension on to another mage like himself. Unforunately, he had to leave quickly and so could not make the choice in person. He sent letters regarding the gift to all of the Mage Guildmaster/mistresses. And they promptly did what many people in similar situations do. I.e., ignored it.

So, to get started, find one of those letters. (There's one in each guild hall. None are obvious, but only one is very hard to find.) The letter will tell you what you'll need to do. Again, you'll need some rank in the guild, some fame, and a reasonably sturdy constitution (esp. if you have the Apprentice birth sign). And one other thing (see the letter).

Note: Gaining access to the gate will require reaching the second level of a moderately difficult Ayleid ruin.

The gate is accessed through a portal, which you can summon. However the portal cannot be used while in combat and summoning it imposes a five minute 100 point health drain on the user. The idea here is that the cost will dissuade you from summoning it all the time. You'll need to feel fairly secure that you won't be attacked in the vulnerability period after summoning the door. So, you might summon the door repeatedly in town without worry, but if you're in the wild, you'll need to clear an area of enemies, then summon the door, then wait a bit (good time to loot the area you just cleared) before adventuring on. Since the penalty is only paid when summoning the door, not using it, your tendency will be to move the door to a central location, which you can forage out from.

After you've gained the gate spell, the gate portal will be given a quest marker to help you locate it, in case you forget where you left it. However, there are no quest markers or notices before that time.

As of version 0.08, Salan's Cellar requires Cobl (version 1.18 or higher). Among many other features, Cobl provides a powerful alchemical sorter and The Luggage, which Salan's Cellar now uses.

You can download Cobl from Wrye Musings or Planet Elder Scrolls. If you want Cobl to have a minimum impact on your game, then only activate Cobl Main.esm. However, if you also want access to The Luggage, you should activate Cobl's other esp files as well.