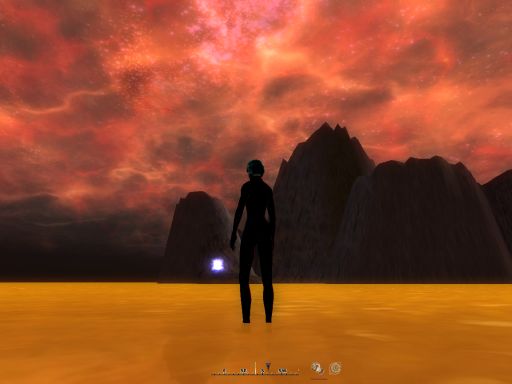 Warning! Beta Release: Use at your own risk! Spoilers ahead.

At the end of the SI MQ, you gain the ability to resurrect at Castle Sheogorath, but like many of the other MQ rewards, it's a pretty cheesy and somewhat flakey reward. If your nature has indeed fundamentally changed, then this isn't a power that you should have to invoke, nor should it be limited to SI – rather it should be an aspect of your new nature. Moreover, the results are not very satisfactory – surely a better implementation would be possible. Finally, there are problems with the resurrect mechanism used. So...

Here's what I think should happen: Upon dying, your soul is tossed back into the Waters of Oblivion. All of your equipment is lost with your temporary mortal shell at the place where you died, and your now daedric essense is thrown back to the Waters of Oblivion, from which you must seek return. The Waters of Oblivion are barren (or at least the parts you get thrown back to are). Land, water, sky, rocks, perhaps a little grass and the most occasional lone dead tree. There's something rather archetypal about the locations there. If there is life, it's not very physical – more like will-o-wisps, but not at all interactive with you. So, you're thrown there, and then it's just a matter of finding a portal (more of a weakness between the planes) which you can use to return. When dying you'll randomly end up in one of several worlds. Find the exit and it will take you somewhere in Isles (or less often Nirn). Then you'll need to recover your goods.

Sounds great, but like I say, I don't have time. What this mod does is the barest minimum of that. Dying will boot you to one place in the single Oblivion plane. Find the exit and leave. Once you get out, go to Castle Sheogorath – there, on the right hand side of the throne you'll find an Amber Stump called "Sheogorath's Bones" which wll contain all of the items that you lost when you died.

Unless, you've acquired The Luggage! In this case, The Luggage will pick your dead body clean. I.e., you'll be able to retrieve your stuff from The Luggage. (Gotta love that faithful little wooden monstrosity!) BTW, The Luggage will appear in Castle Sheogorath (near the Seducer Escort), as well as many other places.

•  When you're sent to the Waters of Oblivion, you'll end randomly in one of several locations. Most of these locations are at in the water, and you'll end up on the sea floor. You've automatically got water breathing and water walking, so just swim up.

•  There are three exit doors (currently), with only one available at any one time. If your quest compass is available, you can use that to find the portal – since all quest targets are on the other side of the active door. If you've deactivated quest icons on the compass, all three doors are on or near the island, so head for it. During really dark weather, you may not see the island. Wait for a lightning flash to illuminate it, or use wait menu and wait for weather to change.

•  If you swim north from the island, you'll find that the water just ends, and you'll fall onto the sea floor below. Weird. Like I said... Beta. If this were a regular release, I'd figure out how to fix that.

This formerly used a threshold backed up by set essential. But as of version 0.04, Cobl's death handling feature is used instead. (Cobl uses setEssential with some tricks to prevent camera drop, etc. Thanks to Scanner for these!)

There are probably tons of potential conflicts. Particularly problematic would be any situation in which a quest locks you into some worldspace temporarily (e.g., Paradise, Boethiahs quest, Painters quest, etc.) Since you can die your way out, quest logic may break. In this case it may be necessary/desirable to reload a saved game.

Aside from that, there may be scripted encounters with enemies that break because of your sudden removal from the current location. Again, you may have to revert to a save.

Weather mods? I was using natural weather and it seemed to interfere with weather in the new worldspaces. So I remove Natural Environment from my loadset. Haven't tried AWS though. Weather mods should not be messing with weather in unknown woldspaces.

Like I said, I probably won't have time to go much further with this. Main thing to be done is add more worldspaces – so it's largely a pure scenery design problem.

There was a bug in version 0.02 which resulted in your health being modded upward by 50 points every time you died. Result was that you would start seeing health scores like 250/200, then 300/200, then 350/200, etc. (one increment per death). There used to be a fix for this, but by now (5 months later) it is assumed that it's no longer necessary and has been removed.

Wrye Shivering Death uses Cobl's death handling feature and (optionally) The Luggage. You can download Cobl from Wrye Musings or Planet Elder Scrolls. If you want Cobl to have a minimum impact on your game, then only activate Cobl Main.esm. However, if you also want access to The Luggage, you should activate Cobl's other esp files as well.

•  Some resculpting of the terrain and door location.