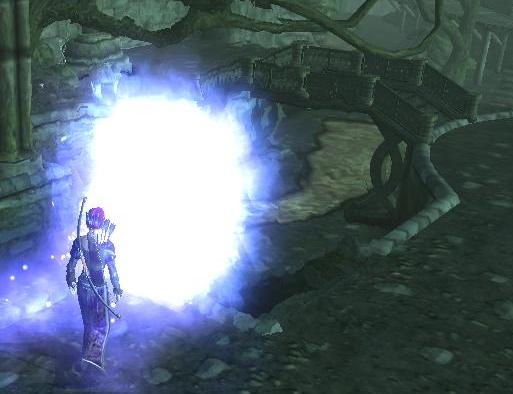 This began with the addition of Shivering Gate (a movable portal to take you to/from Shivering Isles). However, I'm expanding it with misc. fixes and post main quest tweaks. It's still a WIP, but a usable WIP!

After you complete main SI quest, you'll acquire access to a portal that will take you to and from Shivering Isles. The portal has two ends, one within the Isles and one outside. Both doors can be moved as desired to any outdoors location by using the "Shivering Gate" lesser power. You'll find the Isles portal on the Palace grounds, while the other portal is initially in Skingrad (SW corner). The Shivering Gate power becomes available as soon as you use either portal. Both gates also have quest markers associated with them (in case you forget your forget where you parked your portal. :)

Note: The gate scripts duplicate what the existing transport door script do, so dialog and jail behavior should be correct. The gates do not bring companions through. (Part of the problem is that they're not really doors. The other problem is that most companions don't have greetings in SI.)

There are several new quests which allow you track various groups of people in SI. Note that if a non-quest npc has wandered off and gotten killed then they're in the world, but invisible, so their tracking location is not very useful. I'll try to fix this in a later release.

•  Residents will now (usually) go indoors instead of hang around outside and get slaughtered.

•  Rewards are a bit more varied.

•  After MQ, these are now both visitable and Knights and order crystals have been removed.

After main quests, breaking and entering a still a crime, but being inside is no longer considered trespassing. And if caught committing a crime, you can now choose to go to prison if you want. Just for the fun of it. (Besides it's the only way to reach those parts of the prisons.)

•  Choosing to have Dark Seducer or Golden Saint follow you will automatically dismiss the other escort.

•  Improve portal gates – should now stay in place across quit and reload. Also, the portal moving spell is now a lesser power.

•  Breaking and entering is a crime, but you're not considered as trespassing once inside.

•  Now works outside of the palace.

•  Saint and Seducer Escorts can converse with you (a little bit).

•  Assigned Traelius to Heretic faction (had no faction and no greeting).

•  Fix schedule for Dredhwen to get her back to Passwall.