I'm interested in what I call "mega modding" – i.e. very large scale mod friendly gaming. From my brief experience in attending the Austin Game Developers conference, modding is something that is very poorly appreciated in the gaming business. It seems that very few people in the business realize how large modding can be. Which means that there's a large business opportunity that has been largely untapped. More on this later.

For the lunch and beer crew (and other folks) that I met at the Austin GCC...

The page below is geared towards Oblivion and Morrowind mod players, hence it is lacking some background information that is well known by these players.

The main point that needs to be communicated to an outside audience is that mods are not simply minor tweaks or re-implementations of well known themes. Rather, mods for these games provide a vast expansion and improvement over the the original game world. In short, a "normally" modded Oblivion installation provides a 2 to 4 times content expansion over the original game.

Such a large expansion is not achieved simply by an aggregation of separate contributions, but rather is the result a large integrative effort involving the development of special libraries, several complex integration tools, and careful community organization. Rough analogies can be made to creation of large open contribution projects such as linux and Wikipedia.

To explain this a bit further, I think that I'll need provide a brief tour of a typical modded Oblivion installation, and cover the tools and community efforts that lay behind that. I'll have that posted by Friday 9/25.

If you would like to check around before then, then you might check the TesNexus Top 100 Lists, Official Oblivion Mods Forum, dev/akm's Mods, UESP: Recommended Mods.

In the mean time, it was a pleasure meeting you and thanks for dropping by my web site!

Oops: That's a bit dated. I still need to write that up, but I won't have time for a little while.

•  A somewhat acerbic categorization of various types of modders, forum members and other community phenomena.

How To Be Ignored

•  Are forum members showing a distressing tendency to reply to your posts? Fear not! This short guide supplies many hints and inside tricks for keeping those pesky posters from interrupting a long series of posts on your part!

How Not to Make a Request

•  How not to request changes and features for my mods and tools.

•  It was suggested that Britney is actually the notorious DarkFlame. My thoughts on this, and a brief exchange with Britney before the thread was deleted.

Mods and tools for the Elder Scrolls game, Oblivion.

Wrye Bash is a Swiss Army Mod Tool! I.e., it does a bunch of stuff, so it's kind of hard to categorize! However, in general, it does two types of things:

•  Manage Oblivion mods and savegames in a general way. E.g.:

•  Import PC face from one game to another.

•  Fix the door/flame animation bug that occurs around 200 hours.

•  Now managed by PacificMorrowind and Raziel. Docs posted here may be out of date. 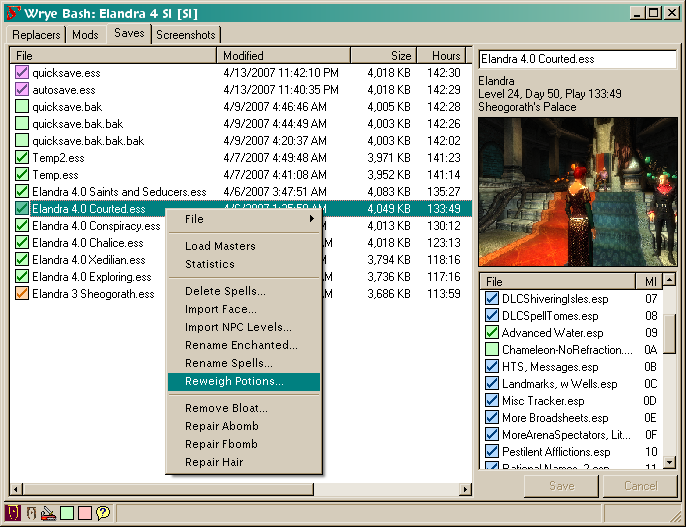 •  An esm library of shared resources for Oblivion modders and players.

•  Now managed by Haama. Docs posted here may be out of date.

•  No more casually scrolling through your menus while being attacked! This mod causes you to fumble (i.e., be paralyzed) if you spend more than a few seconds in menus while under attack.

Knights of the Nine Patch 02

•  Obsolete! Use the Unofficial Official Mods Patch instead.

•  Fixes the start of the Kynareth quest in Knights of the Nine.

•  Now you must train in order to level up. Aka, yet another approach to levelling.

•  Causes PC to undress while sleeping. Aka. PC Sleeps Nude.

•  Obsolete! Use Cobl + Wrye Bash's version of Power Exhaustion instead.

•  You can now use (Vanilla Oblivion) greater powers at any time. But use them too frequently and you'll suffer serious harm or death.

•  Note is an extension of Moho's Ranked Spells (which it replaces) and makes use of DoofDilla's excellent recolored/retextured potions (meshes/textures not included – download separately.)

•  A moderately nice pocket dimension in the Imperial Tower style with plenty of storage area. Balances uberness of pocket dimensionality somewhat with penalties for use. Must be at least Apprentice level mage with some fame and a moderately strong constitution to use.

•  Summons an attractive double bed to player's current location. (If that location is not a major city and player is not in combat or trespassing, and if player is at least moderately wealthy!)

•  Wrye Leveling removes usage and training based skill leveling altogether and replaces them with an all-at-once level up based on your ability to pay. (Under the theory that gold == experience.)

•  For each levelup, you have a fixed number of points to spend on attributes and skills. Attribute points can be spent on any attribute, regardless of what skills. I.e. no power leveling.

•  Allows the player to morph between an unlimited number of forms, each with their own race, gender, stats, class, factions and equipment. New forms can be created from scratch or copied from existing npcs.

•  When doppelganging, you can choose to physically replace the original, moving to their current position and taking over ownership of their items and cells.

•  Makes both Brellach and Pinnacle Rock visitable (minus Knights of Order).

•  Improves the death avoidance/recovery award that you receive at the end of the Shivering Isles main quest.

•  Death avoidance is now a permanently active ability (rather than a spell), and will succeed almost all of the time.

•  Not overbalancing though – expect a long walk. In the nude. Through hostile territory. Try not to die again. :)

•  These are pretty dated, but some might find them useful.

•  Scripts and templates for the 010 Hex Editor. 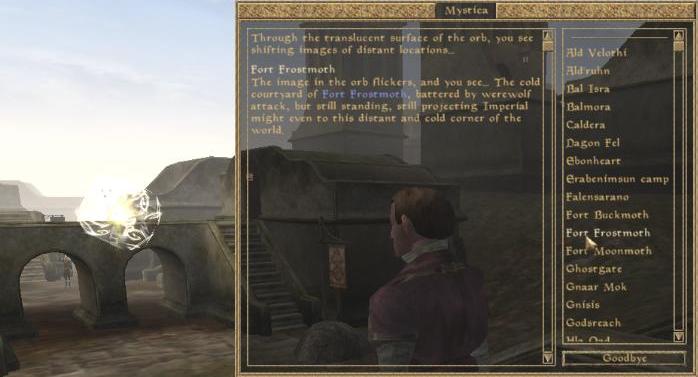 Mods and tools for the Elder Scrolls game, Morrowind.

•  Erika's Outlet: A one stop shop in Seyda Neen with dynamic stocking/unstocking (i.e., you determine what inventory is displayed).

•  Luggage: A very deep chest that sort of follow you around. It likes pubs, Mage Guild Halls (if you're a member) and Great House Strongholds (if it's your stronghold). An alternative to transportable containers that doesn't require any special actions on reload.

•  Icarian Flight: A scripted spell that allow you to leap tall buildings and huge swathes of land in a single bound. This is the best way to get around Morrowind.

•  Ever been annoyed by having left and right gloves separated in inventory? Or by trying to remember whether it's "Ring of Khajiit" or "Khajiit Ring" Or by having scrolls appear right in the middle of your book collection? Or by having polysyllabic "ex" words as distinguishers of clothing? Or by having no clue as to what "Rusty Key" is used for? Wrye Patches is a "name replacer" that fixes all of these problems and more!

•  Adds "not local nolore" tests for a number of generic responses.

•  Removes generic responses that the user is likely to already know and which don't add to the atmosphere of the game.

•  This is an extensive rewrite, updating, and extension of Joe Stevens' class LGNPC Seyda Neen.

•  It add less generic dialog to most of the NPCs in Seyda Neen as well as a small social quest.

•  This is a medium sized expansion of Wolverine Hall, the Imperial Fort on the southern edge of Sadrith Mora.

•  Added housing and improved schedules for all NPCs living and working in Wolverine Hall.

•  A trader with a wide selection, and a local tavern with a rentable room. If you have NOM installed, then you'll be able to rent the room for periods up to 120 days.

•  Public baths... Just the place to unwind after a long day of hacking, slashing and arguing with your faction boss!

•  This is an update of Helios' classic scheduling mod. It adds schedules for many of the NPCs in Morrowind and locks doors at night.

•  Complete Script Regeneration: All schedules (except for Training scripts) are now generated from the source text file, which is included with this release. Script generation and import is performed by the Import: LCV Schedules function in Wrye Mash (v0.39 or later).

•  Idles fixed. NPCs should move around a lot more now.

•  A small upgrade to Taddeus and Nymeria's awesome Necessities of Morrowind!

•  Use utensils in place as well as inventory.

•  Better water sensing for bedrolls and campfires in interior cells.

•  This is Argent's BSA Browers, which is a java gui wrapper around Ghostwheel's BSAPack command line program. Since both Argent and Ghostwheel have now departed the scene, I'm hosting this combined tool here.

•  French Maid Outfit by Drakron. A while back, I agreed to host this when Euro-Morrowind went down. Then Drakron put it on Tesmods. Months later, that was down too, so I put it back. Lo and behold, it seems to be my most popular download (and that's when the only public link was in a BB Clothes forum topic!)

•  Note: Check out Wrye World too. Erika's Outlet in Wrye World sells the French Maid outfit as well as other popular clothing mods.

•  Prevent GMST contamination from every happening!

•  This is a semi-random collection of advanced modding observations. This is not an introduction - it's more like an addenda to existing guides such as Ghan Buri Ghan's Morrowind Scripting for Dummies.

•  This is a long document that explains why doubling, deleting happens and how to deal with it. It's long and will scare newbies! You've been warned!

•  The curative programs proposed in this doc are partially realized in Wrye Mash.

•  Prevent Doubling! Mash is the only tool with the ability to prevent doubling and related reference errors.

•  Repair All: Mash is the only tool with the ability to automatically repair references on game files. And it deletes orphan contents, and "debris" globals, npcs.

•  Manage Mods, Save Games and the Load List: Rename, duplicate, hide, and reorder mods and save games.

•  Ref Removers: Remove troublesome references from a save game.

•  Ref Replacers: Replace one set of refs with another. NOM that Mod!

•  Doc and Journal Browsers: Easily review the docs for any mod and/or the journal for any save game.

•  Copy the masters list to the clipboard for forum posts, etc.